In terms of Australian Football, much is made of rivalries or derbies and of the conflict and angst which may exist between certain teams. Whether it may be actual and based in a reality of animosity and historical grievances, through healthy sporting competition, or whether they be artificial and invented by various media commentators and protagonists, all for purely superficial marketing purposes.

Sydney Olympic was founded as Pan-Hellenic in 1957, as a composite team of several Greek teams already playing in Sydney at the time such as: Taxiarchis, Atlas, Astro and Pansamiakos. The majority of Pan-Hellenic’s 1st group of players and officials came from these clubs.

The name Pan-Hellenic was chosen so as not to appear to represent one group of Greeks over another, whether politically or regionally. Whether you were a Leftist, Centrist, Rightist, or whether you were an Athenian, Macedonian, Cretan, Cypriot, Pontian, a Greek from Constantinople & Asia Minor, Egypt, Russia, Romania or Northern Epirus, all would be welcomed and be united under Pan-Hellenic.

South Melbourne meanwhile, was formed as South Melbourne Hellas 2 years later in 1959, after the merger of 3 clubs: South Melbourne United, a historic English-backed club which had been around in Melbourne since the 1930’s, but which was now struggling and had seen better days and 2 bigger backed Greek clubs in Melbourne: Hellenic and Yarra Park Ajax. 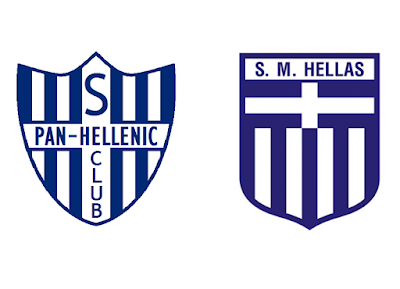 Ever since that time, both clubs would fight it out for the unofficial mantle of the biggest Greek founded football club of Australia.

In the late 1950’s & early 1960’s, both clubs would look to Greece for the recruitment of new players, enticing young Greeks with dreams of jobs and better lives for them and their families, as well as an opportunity of playing football at a relatively decent level.

Australia being banned from FIFA at this point in time was also advantageous for any such advances, as clubs from Australia could approach any players that they wanted, without needing to worry about breaking any rules or paying any transfer fees. In this endeavour, South Melbourne Hellas would soon earn the ire of Pan-Hellenic officials.

All inbound International flights into Australia would always stop off in Melbourne first, before continuing on to Sydney. There are a few instances of Pan-Hellenic organising everything for a player from Greece to come to Sydney, only for South Melbourne Hellas officials to meet the plane as it landed in Melbourne and persuade the player to get off and sign and stay in Melbourne and to forget about going to Sydney to play for Pan-Hellenic. Cheeky at the very least.

Both clubs would end up taking dramatically different paths during their journeys through their respective state federations of New South Wales and Victoria.

Although both clubs started their lives in their respective state 2nd tier competitions before earning promotion, once promoted, South Melbourne Hellas went on to win multiple League and Cup honours throughout the 1960’s and 1970’s in Victoria. Where as in contrast and not for the want of trying, Pan-Hellenic experienced many near misses during the same period with its trophy cabinet remaining bare, aside from the two NSW 2nd division titles of 1958 and 1960.

The clubs would first meet in a match in Melbourne in 1964, with South Melbourne Hellas handing out a 6-1 hiding to Pan-Hellenic, a match was scheduled to take place again in 1966 in Sydney, but was ultimately cancelled. In 1974, a combined South Melbourne Hellas-Fitzroy United Alexander XI hosted Pan-Hellenic in Melbourne, to raise funds for the victims of the Turkish Invasion of Cyprus. The match itself and result will always be secondary to those tragic events, but for statistics sake, the Melbournians won 3-1.

The clubs would meet each other for the first time in an official competitive fixture in 1977, after the formation of the National Soccer League (NSL). It was a Round 1 contest at the Sydney Sports Ground, South Melbourne defeated Sydney Olympic 2-0.

Olympic’s 1-0 loss on the final day of the 1979 NSL season to St. George, saw St. George leapfrog Olympic on the ladder and for that extra bit of irony, it was a winner from a teenage Peter Katholos playing for St. George that day, which would seal Olympic’s fate. Meanwhile South lived to fight another day.

Depending on who you talk to, suggestions are that South Melbourne vigorously lobbied the Australian Soccer Federation (ASF) to have Olympic relegated instead of South and to use the excuse of there being “too many Sydney clubs in the NSL”, the ASF obliged and relegated Sydney Olympic back to the NSW 1st Division, despite finishing above South Melbourne on the ladder.

Talk to others, and they will tell you a different tale and that it was all agreed by the ASF and the NSL clubs before the start of the season, that the last placed Sydney club at the end of the 1979 NSL season, would be relegated. Nevertheless it was an incident that Sydney Olympic people would not forget.

Once again the clubs would go in different directions following this event, with South Melbourne’s status in the NSL seemingly safe, they swiftly sorted themselves out and went from strength to strength, becoming a perennial League and Cup challenger for the rest of the duration of the NSL.

For Sydney Olympic, they were back in the NSW State League in 1980, fortunately, its time back in the NSW 1st Division was short lived, as they thumped Parramatta Melita 4-0 in the NSW Grand Final, to earn promotion back to the NSL for 1981. Funny how things work out as once back in the NSL, Olympic also and relatively quickly, got their act together and became a mighty force for the rest of their NSL run.

To illustrate the point, within 3 years both clubs would be facing off against each other for the honour of becoming Champions of Australia.

In Round 17 of the 1999/2000 NSL season, Sydney Olympic fans would witness a historic 6-0 beat-down of South Melbourne at Belmore. The jokes, remarks and crowing from Olympic’s end would not even last a week, as only a few days later in the return Round 18 fixture in Melbourne, South turned the tables on Olympic with a 2-0 victory.

Both of those results were inexplicable in their own way, but that is the magic of football we are led to believe and another chapter in the history of the clubs.

The final official competitive fixture between the clubs came in Round 26, the final round of the last NSL season of 2003/2004, a 0-0 draw at Kogarah Oval. 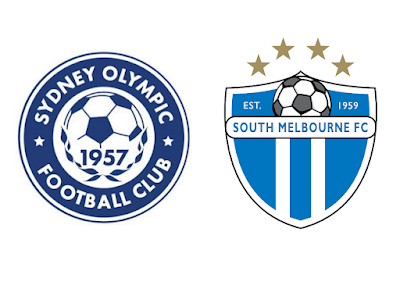 Sydney Olympic’s poor overall head-to-head record against South Melbourne is also another perplexing one and for sure another sore point among the Olympic supporters and a source of humour no doubt, for those who follow South.

Sydney Olympic has a winning record against almost every other major rival, except for South Melbourne and Sydney Hakoah. Olympic’s record vs. South is particularly poor and baffling, given how good Olympic’s sides were throughout the entirety of the NSL. It is very difficult to nail down exactly why or what the issue may have been but as with most unexplainable things, it will remain a mystery.

Since the end of the NSL in 2004, the clubs have met each other only twice in exhibition matches. South Melbourne invited Sydney Olympic to open their newly refurbished Lakeside Stadium in 2011, with Sydney Olympic spoiling the party picking up a 3-2 win and in 2016, where Olympic played host to South at Kogarah Oval, with Olympic winning 4-3 via a penalty shoot-out after a 0-0 draw.

It is a rivalry unlike any other you’re likely to see, especially when it comes to the so called “ethnic” founded clubs in Australia. Because according to what I have seen and witnessed most of the time throughout Australia, clubs founded by the same ethnic or national group get along in an almost brotherly manner, especially when it concerns those clubs that operate in separate cities or different states, but speak to most South Melbourne and Sydney Olympic supporters, there was nothing better than seeing the other struggle, or getting one over the other on the football pitch.

The fact is this rivalry, crosses state lines and Olympic and Hellas fans can be found all over Australia, not only in New South Wales and Victoria and even abroad.

Hopefully one day the time will come, where we can officially lock horns once again, there is unfinished business.

Have a Merry Christmas and a Happy New Year.
Posted by Chris Stompa at 18:05